THE AGING SENEGALESE DIASPORA IN MILAN 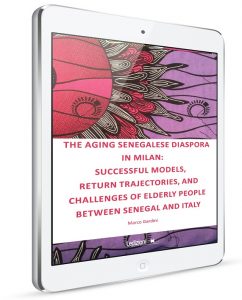 From the colonial period to the 1970s, France has been the main country of destination for the Senegalese diaspora. The French and Senegalese academic debate on migration has paid considerable attention to the mobilities connecting Senegal and the former colonial power, focusing on – among other things – how kinship structures and gender and generational roles have been reproduced or reconfigured in a transnational space deeply structured by longstanding cultures of migrations (see, for instance: Dia 2008, 2010, 2013; Diop 2008; Timera and Garnier 2010). In the late 1970s, when France started to implement more strict immigration policies, the Senegalese diaspora diversified its European destinations. Italy was one of them, and migrants from Senegal started to arrive in the 1980s, working mainly as street vendors but also contributing to an industrial system that was starting to shrink. Migrants of this first generation are now approaching or have reached retirement, have spent a large part of their lives in Italy, were joined by wives and had children in Italy, in many cases have obtained permanent residence permits or citizenship, and are now facing the many challenges connected to aging in a diasporic context.