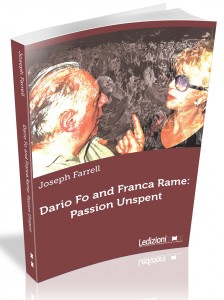 In the official citation explaining the decision to award the 1997 Nobel Prize for Literature to Dario Fo, the Swedish Royal Academy stated that he had emulated the jesters of the Middle Ages in scourging authority and upholding the dignity of the downtrodden. It went on to add that with a blend of laughter and gravity, he opens our eyes to abuses and injustices in society: Fo is an extremely serious satirist. Since the award of the Nobel prize, Dario Fo has never stopped writing, performing and painting. He was deeply affected by the death of his wife Franca Rame and has dedicated works to her.

This book traces the biography of Dario Fo and Franca Rame from the award of the Nobel prize to the first months of 2015.